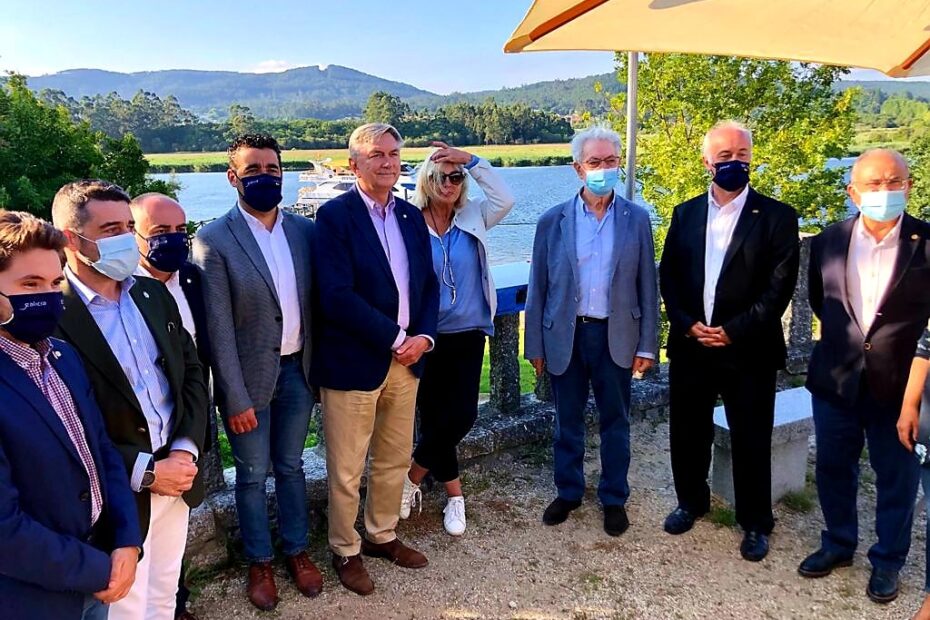 Mar de Santiago wins over everyone that gets a chance to become acquainted with this destination. The unique range of tourist options available in the municipalities that make it up – Vilanova de Arousa, Catoira, Valga and Pontecesures– are highly attractive. The Russian ambassador to Spain, Yuri P. Korchagin, was captivated by the region’s charm.

So much so that he even sailed the Mar de Santiago route, discovering by boat the only sea-river Way of the Cross in the world. By means of this boat trip, the Russian ambassador enjoyed a first-hand experience of the Way to the Origin, by means of the Route of the Sea of Arousa and River Ulla. He thereby discovered the itinerary of the “Traslatio” from Vilanova de Arousa as far as Pontecesures, enjoying the area’s scenic and heritage gems.

During his trip, he was accompanied by the mayors of the four municipalities that make up this tourist destination, namely Gonzalo Durán (Vilanova de Arousa); Alberto García (Catoira); José María Bello (Valga), and José Manuel Vidal (Pontecesures), who explained the main tourist attractions to the diplomat. They were also accompanied by the regional government’s territorial delegate in Pontevedra province, José Luis López Diéguez.

Yuri P. Korchagin’s interest in Mar de Santiago arose at the presentation of this new tourist destination during Madrid’s Fitur event. The Russian Federation also has a close relationship with the Town Council of Vilanova de Arousa, with which it is twinned. These ties were further strengthened with the diplomat’s participation in the opening of the exhibition Nenos Pintores de Arousa. Intercambio cultural España-Rusia 30 anos despois (Young Painters of Arousa. Spain-Russia cultural exchange 30 years later). This was followed by the unveiling of a bell as a gift from the Russian community to Vilanova.

This event served as the starting point for the Russian ambassador’s trip around Mar de Santiago. Apart from the boat trip, he also enjoyed this tourist destination’s great food and wine. In this regard, he had to try Valga’s eau-de-vie, an iconic product that is promoted by means of the eau-de-vie festival called “Mostra da Caña do País,” which is held every year in the municipal district. In Pontecesures, he had a chance to try the area’s typical wines –which belong to the “Rías Baixas” Designation of Origin– as well as other Galician wines. He also enjoyed one of the municipal district’s typical dishes, lamprey. Defined as the dama del Ulla (lady of the Ulla River), it’s featured in one of the municipality’s main food festivals.

The visit also served to acquaint Yuri P. Korchagin with Mar de Santiago’s great cultural and heritage value for visitors. The sites he discovered included the Vallé-Inclán Museum in Vilanova de Arousa and the Torres de Oeste fort in Catoira.

The Russian ambassador to Spain defined the Mar de Santiago tourist destination as “original.” And it’s not surprising since it’s the ideal option for supplementing the pilgrimage to Santiago. After completing the route in the Cathedral, you can round off your trip by enjoying the varied tourist attractions of Vilanova de Arousa, Catoira, Valga and Pontecesures, all of which are linked by this Way to the Origin.