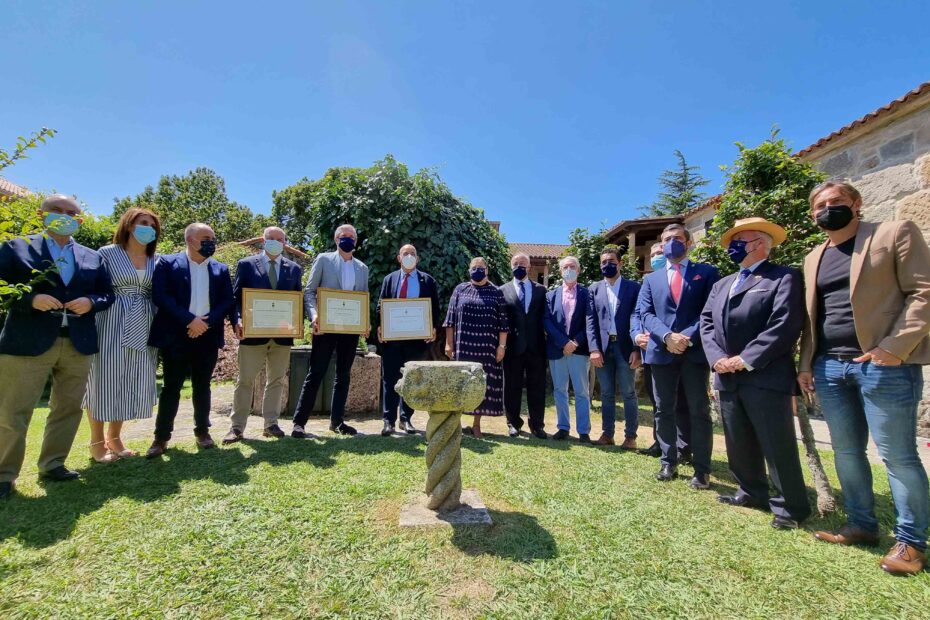 Mar de Santiago was one of the main features of the 27th Mussel and Cockle Festival of Vilanova de Arousa. It is one of the destination’s most important gastronomic festivals. An event that enables you to discover the work carried out by those who make a living from the sea, as well as the quality of their zero-kilometre products.

This event, which was declared a Festival of Galician Tourist Interest in 2014, is held in the second weekend in August, attracting thousands of people interested in these two delicious bivalves. This year’s festival, although affected by health restrictions, was a great success, especially in the case of its tasting tents.

This special event paid tribute to the those who have helped to promote Mar de Santiago as a unique tourist destination, linked to the pilgrimage to Santiago. Not in vain, this territory features the ideal alternative for undertaking this Route. Once completed, it offers the possibility of carrying out a new itinerary that will enable visitors to complete the Original “Camino”.

As part of the 27th Mussel and Cockle Festival of Vilanova de Arousa, special prizes were awarded to those who helped to promote the destination. The prize-winners included the Catoira musician Roi Casal, who also delivered the festival’s opening speech; the vice-president of the Xunta de Galicia, Alfonso Rueda; the mayor of Ponte de Lima (Portugal), Víctor Manuel Alves Mendes, and the vice-president of the International Federation of Friends of the Way of St. James Associations, Antonio José Pereira.

During his speech, Roi Casal, who recorded the soundtrack for the Mar de Santiago promotional video, declared that “this is a project that has everything.” And he wasn’t exaggerating since our tourist destination combines history, nature, gastronomy and the only maritime Way of the Cross in the world.

Precisely in relation to this last aspect, tribute was paid to the mayor of Ponte Lima and the representative of the international federation. The reasons behind this recognition include, as the mayor of Vilanova de Arousa explained, the fact that both Víctor Manuel Alves and Antonio José Pereira were “the first ones that committed themselves to reviving the pilgrimage route via Ría de Arousa.” Thus began the work to promote this Original “Camino.”

The vice-president of the Xunta de Galicia was also awarded the festival’s most important prize, in recognition of “his collaboration in implementing Mar de Santiago and for his work in making a success of the most difficult Holy Year in history.” Alfonso Rueda, for his part, highlighted the great potential of the Mussel and Cockle Festival of Vilanova de Arousa as one more attraction for the area’s numerous visitors. An event that therefore benefits the entire region and makes Mar de Santiago a “sustainable, quality” tourist destination.

The prize-giving ceremony, which was held in the Valle-Inclán House Museum, featured the presence of the Mar de Santiago’s other mayors (Alberto García -Catoira; José María Bello -Valga; and José Manuel Vidal -Pontecesures), as well as the Xunta de Galicia’s territorial delegate in Pontevedra province, Luis López; the president of the Regulatory Council of the Galician Mussel Protected Designation of Origin, Lina Solla; the president of Friends of the “Camiño”, Celestino Lores, in addition to other local and regional personalities.

Last week, the Mussel and Cockle Festival of Vilanova de Arousa’s programme filled the town with visitors, who participated in its wide range of activities. These included different concerts that were held during the festivities, as well as tasting tents. This gave visitors a chance to taste the quality and flavour of two of Mar de Santiago’s main products.

An experience that none of the area’s visitors should miss. Not in vain, there exists the possibility of becoming acquainted with the work of the mussel industry by means of boat trips around Ría de Arousa, which include tastings.

An option that can fit in perfectly with other activities and visits that enable us to discover the striking nature, extensive heritage, historical links to the pilgrimage to Santiago and culture of the municipalities that make up Mar de Santiago. A not-to-be-missed break!