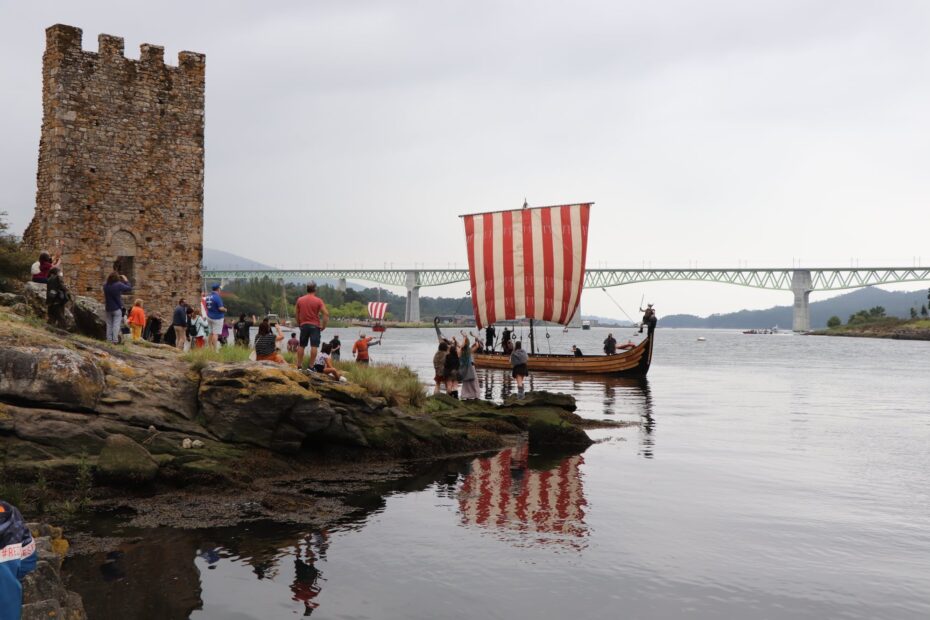 Among the many attractions of Mar de Santiago, we can boast of having in our area a festival that was declared to be of International Tourist Interest in 1988. As you know, every first Sunday in August the traditional Viking Festival is held in the locality of Catoira.

This year, although held with a different programme and circumstances compared to the customary event, it was still supported by Catoira’s residents. And so the spirit of the Vikings returned to Catoira, one of the localities that form Mar de Santiago.

The origin of this festival goes back to 1960. Its objective is remembering and commemorating the Scandinavian, Viking, Norman and Saracen invasions of Galicia. The invaders’ goal was to reach Santiago de Compostela by way of the Ulla River and thereby conquer Galicia and plunder the Cathedral. The so-called Torres de Oeste were then erected to protect the coast. That is the setting of the Viking landing, which is the main feature of this popular festival.

Holding the Viking Festival in an atypical year

Although, this year, the Viking Festival of Catoira was held without its traditional Viking landing, due to the situation of the COVID-19 pandemic, the essence that characterises the event was not lost. The three longboats with Vikings sailed up to the ruins, but without the assault, combat and large crowd watching the attacks.

Once again, the invaders sailed along the waters bathing Catoira,in the midst of the expectation caused by the 200 tickets issued by the Town Council. We undoubtedly missed the traditional landing, but we were eager to see the longboats arriving.

The festival continued with a Viking parade to liven up the atmosphere before the arrival of Baiuca, a musician from Catoira who performed in the morning at the Torres de Oeste. The artist provided the perfect soundtrack for a festival featuring Barbarians that filled the air with their war cries. After his performance, the longships or drakkars called Torres de Oeste, Frederikssund and ArdglassCatoira sailed along the Ulla River as far as the island called Illa de Castrivello.

Catoira forms part of the Mar de Santiago region along with the localities of Vilanova de Arousa,Valga and Pontecesures. It is the ideal destination for visiting this summer, all the more so if you include experiences like that of the Viking landing.

The top of the cliff bordering the Pedras Miúdas lagoon or Monte Mesón de Abalo are dotted with windmills from the late 19th century, which are in good condition for visiting if you come to Catoira. They are the perfect places for enjoying panoramic views of Ría de Arousa and the mouth of the Ulla River. Moreover, the Pedras Miúdas lagoon is a spectacular place to spend an afternoon surrounded by nature.

The aforementioned Torres de Oeste is more than just the remains of a fort. It is one of the most important sites in Galicia due to its history and significance. Two stone towers erected on a riverbank of great scenic beauty.

If you are not yet acquainted with Catoira, now is a good time to do so. You can also visit the other destinations making up the original “Camino” or route to Compostela and thereby explore part of the Rías Baixas region.

Catoira is undoubtedly a charming place that is well worth visiting. Not only because it is a symbol of the fight against the Vikings, but also because its surroundings and cultural beauty enable us to enjoy part of Galicia’s attractions. We hope that next year we’ll be able to relive this special festive event in August and, of course, enjoy the landing of Catoira’s Vikings.

Why don’t you come too?