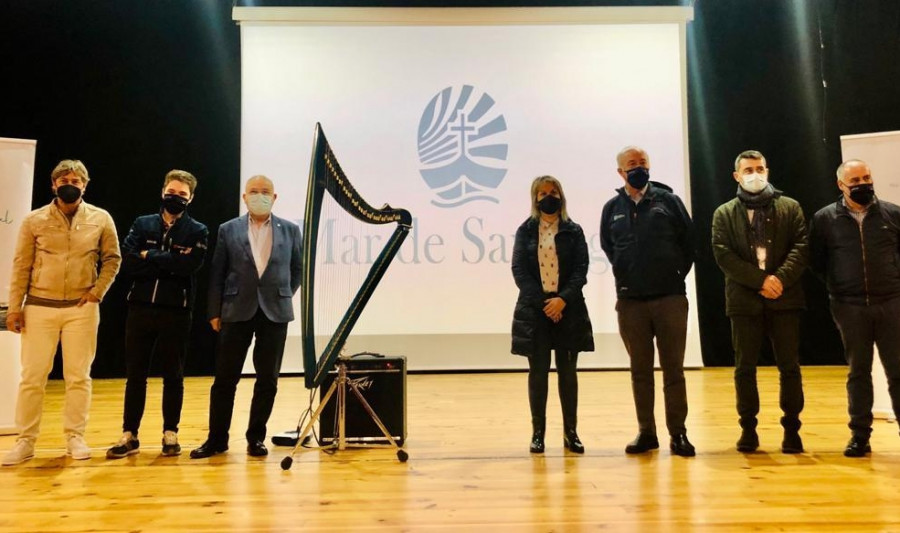 Mar de Santiago now has its own melody! The Catoira musician Roi Casal was the composer chosen to compose music for the promotional video of this sea-river route. It was filmed in the main tourist spots of Vilanova de Arousa, Catoira, Valga and Pontecesures, which will be presented at the Turismo de Galician stand in Fitur, the International Tourism Trade Fair of Madrid, on Wednesday, May 19, at 5.30 pm.

In the words of Pontecesures’ mayor, Juan Manuel Vidal Seage, during the presentation of this collaboration with Casal featuring institutional representatives of the four Municipalities, “every great moment is associated with a great melody,” and in the case of Mar de Santiago, it’s the orchestrated version of “Vai alborexar.”

This soundtrack, whose instrumentality stands out thanks to the harp, ocarina and bagpipes, conveys perfectly the epic nature of this sea-river route that we want visitors to enjoy: an ancestral itinerary that, according to legend, was followed by the Apostle James’ remains on his arrival in Galicia from Palestine, thereby giving rise to the “Xacobeo” pilgrimage.

However, in addition to the sea-river trip that all of Galicia’s visitors will soon be able to enjoy, Mar de Santiago is also an artistic, historical and cultural initiative. Thus, accompanied by the soundtrack of the Original Way, the musician Roi Casal will perform at a series of concerts in emblematic venues in the four municipalities making up the route. The first event will take place at the river port of Pontecesures on May 23, followed by Valga, Vilanova and, finally, Catoira, the composer’s birth place. Another good reason, among the many that already exist, for visiting Mar de Santiago and soaking up the history of the Camino, drop by drop.