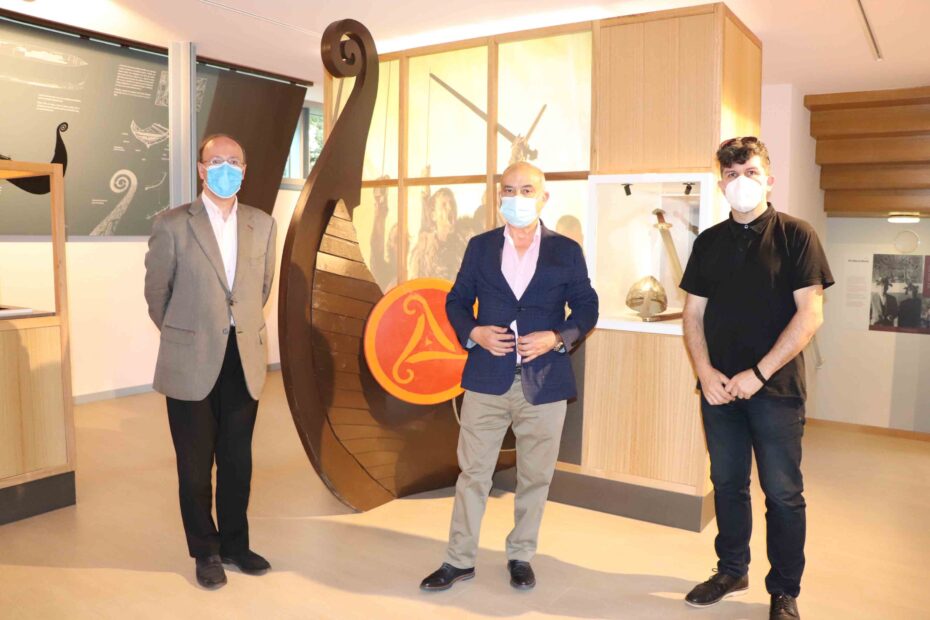 Mar de Santiago has increased its range of cultural attractions by opening the Torres de Oeste Cultural Activation Centre (CACTO). Located in Catoira, very close to the iconic remains on the riverbank, this centre takes you on a tour of this particular site’s historical evolution. The opening event was presided by the mayor of Catoira, Alberto García; Francisco Singul, curator of the permanent exhibition, and Alfredo Sellier, the person in charge of Museology and Production.

This new centre gives you another perspective of the Torres de Oeste fort, its importance for the Mar de Santiago region and, in the past, for inland Galicia. The tour ranges from Prehistory to the present day, linking with the Viking Festival, an internationally renowned event and one of the main attractions for visitors.

If you take advantage of your trip to Mar de Santiago to visit CACTO, your tour will feature six exhibition areas. The first one presents the origin, the land and the people of this territory. In this section, you’ll learn about the megalithic funeral culture, petroglyphs, the Bronze Age and the “castro” culture based on these pre-Roman fortified settlements. They are also present in the remains that we can find at different points in the municipal district of Catoira, which make up an essential part of its evolution.

Right from the beginning, you’ll realise just how important this territory was at the mouth of the Ulla River. This area stood out as an entryway and a protective border between the Atlantic Ocean and inland Galicia, especially the Compostela region.

It was a key location for the sea trade that took place during the “castro” culture and continued to be used in the Julius-Claudius period of the Roman Empire. It is precisely this time that is featured in the second exhibition area, under the title Turris Augusti. As evidence of the Roman presence in this area, there are different types of reproductions such as amphoras and household items (chandeliers, plates, platters, bowls…) in addition to specific references to the Roman settlement in Catoira.

The third area is centred on the Early Middle Ages, featuring the fort’s newly acquired prominence, as well as different invasions and changes that took place during this time. Swabian Galicia, the Asturian Monarchy –which marks the beginning of the Torres de Oeste fort– the discovery of the Apostle James’ tomb, and the Viking attacks in the 9th and 10th century are the main highlights of this section.

The important figure of Diego Xelmírez

The tour around CACTO continues with the exhibition area devoted to Diego Xelmírez, the lord of the Torres de Oeste fort. The information provided here speaks about Torres de Oeste’s golden era (12th century), coinciding with the popularity of the Way of St. James, which became a mass phenomenon. The fort acquired new prominence with its reconstruction and refortification, being called Castellum Honesti. This was done to tackle the forays of new threats from overseas: the men from the north, who came in search of riches in Jakobusland (Galicia).

This is when the important figure of Diego Xelmírez arose. He lived as a child inside the Torres de Oeste castle and, later on as the archbishop of Santiago, boosted the defences of the Ría de Arousa in the Oeste Castle itself. These actions resulted in the construction, in the Ulla River shipyards, of the first fleet of galleys belonging to the Christian Kingdoms of the Iberian Peninsula, which were successful in tackling the forays along the Galician coastline. This subject also serves as the basis of a first look at the Viking influence in Catoira, which is commemorated every summer by means of the Viking Festival.

The CACTO building’s second floor houses a space featuring the landscape and geographical context of the Torres de Oeste’s location. This includes information about places such as Ría de Arousa, the municipal districts making up Mar de Santiago and the parishes of Catoira, featuring valuable cultural heritage.

This sixth exhibition area, located on the building’s second floor, includes a special educational space. It is designed to explain, in an entertaining way, the area’s history, heritage and culture to both schoolchildren and visitors. There is also a small library.

Immersion into the Viking Festival

Finally, CACTO enables you to immerse yourself in the municipality of Catoira’s most iconic event: the Viking Festival. This room features an audiovisual presentation that brings the visit to an end, as well as summarising the interpretation centre’s different sections.

Most of this short film is centred on Catoira’s main identifying features. These include the festival of the Viking landing, the Torres de Oeste fort, details of the castle’s medieval architecture and its cultural, social and tourist values, as the setting of the Viking Festival and landing, which is an internationally renowned festival. It also includes a summary of the municipality of Catoira’s history and its historical, cultural and ethnographic heritage.

In short, a centre that will round off your Mar de Santiago experience. Don’t miss the chance to discover this new cultural centre, which will immerse you in our region’s historical evolution.